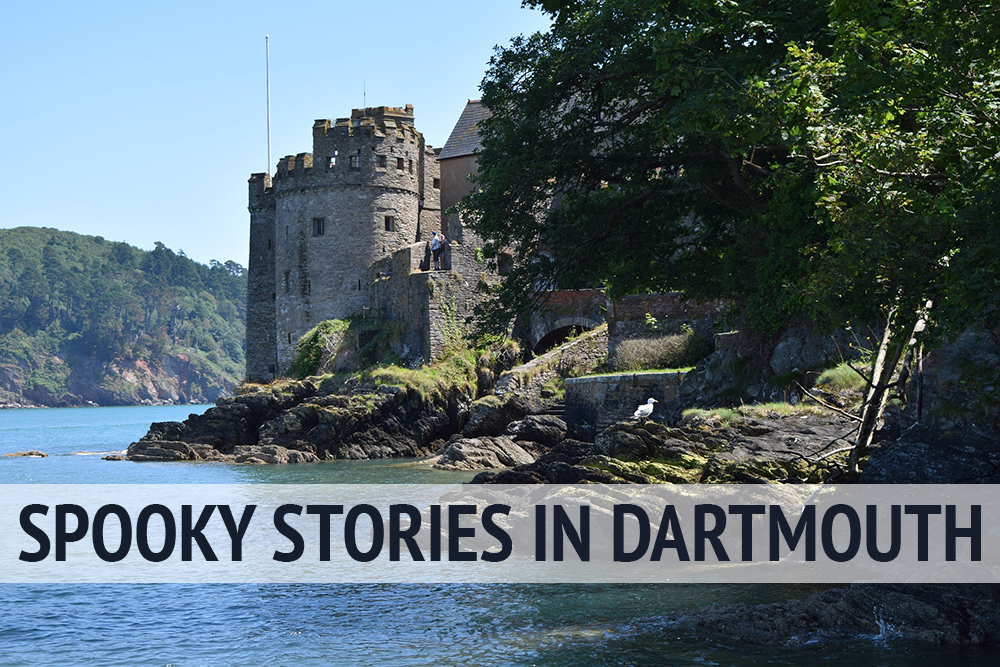 This historic harbor town and sites nearby are home to secrets, haunted buildings and forgotten tales. Read on to discover our selection of spooky stories, unearthing encounters and legends from visitors lucky enough to survive their encounter with Dartmouth and the surrounding area’s most ghostly tales.

For something medieval, spend the day exploring the historic Dartmouth Castle. Follow the ruins as they take you from the Harbour Chain to secret passageways. Built in 1480, the chain was installed to stop ships entering the port, thus making them easy targets for gunman. Follow on round to the Gun Tower and watch a special animation showing how it used to operate. Get hands on with real war-time artillery forts, admire their new weapons display and try on helmets. Venture through secret passageways and follow the dimly lit trails to see gunpowder and explosive shells. There are definitely some spooky and scary stories buried in these castle walls.

You would think it’s safe staying in Dartmouth’s award-winning Royal Castle Hotel, but rumor has it suspicious sounds can be heard whilst guests sleep. If you stay here, you could be (un)lucky enough to book a room adjacent to William III’s ghostly wife, Mary, or perhaps have the man with the “evil-looking face” waking up next to you. During the night, a phantom coach can he heard slamming doors, horses whinnying, and hooves scurrying down the cobblestone streets, believed to be collecting Mary and taking her to William in Torbay.

Don’t be intimidated by the hotel’s imposing staircase, guests including Queen Victoria, Sir Francis Drake and Agatha Christie have survived their stay. For those brave enough to spend their evenings here, the Royal Castle Hotel welcomes guests into their breathtaking building to enjoy fresh, homecooked food and dine overlooking the River Dart.

Every day at midday, an eerie figure swings at a spot called Dead Man’s Cross. Located in Dartmouth, this well-known point is known for showing an illusion of a hanging man, created by shadows on a neighboring house. The shadow is created by a collection of signposts, hence why these crossroads have been named Dead Man’s Cross.

Berry Pomeroy Castle, near Totnes, is believed to be one of the most haunted sites in the country, with numerous ghostly sightings and paranormal activity being recorded. Arriving with the Norman Conquest, the ancient and powerful Pomeroy family had to fight Edward VI for their right to own the castle. In rebellion, the two Pomeroy brothers wore their armour and led their blindfolded horses over the walls into battle.

Unsurprisingly, the soldiers fell to their death and ghosts have since been found to roam the ancient ruins and crumbling walls. Despite its decaying foundations, visitors can still meet the White Lady, believed to be Lady Margaret Pomeroy, who wanders the hallways in eternal remorse for her sins.

Arguably the eeriest, creepiest part of the castle is the underground dungeon, reached only by a twisting stone staircase. Lurking here is Margaret, the victim of her sister’s imprisonment and torture because of their love for same man. If you listen closely, Margaret can be heard in the depths of the tower and her misty form can be felt brushing past visitors in her eternal prison cell. Wrap up warm, there’s definitely a cold chill in the air at Pomeroy.

Berry Pomeroy Castle famously appeared on the TV show ‘Most Haunted Live’ during their ‘Terror in Torbay’ episode, where the host Yvette Fielding actually fainted during their visit!

The Waterman’s Arms is a hidden gem, tucked away on Totnes’ riverside. Don’t be fooled by its picturesque setting, over the years this pub has been home to a smithy, a brew house and feared press gangs. Particularly vigilant visitors have reported seeing Emily, a wandering ghost known to have “dissolved” in front of people. It is unknown where Emily came from, however, this mournful grey lady has the presence to frighten even the bravest of people.

Take a trip on the ferry from Dartmouth to Kingswear and along the coast until you reach Torquay, a stunning coastal resort on the English Riviera. Torquay Museum houses a wide range of exhibitions and collections including Natural History, Ancient Egypt and coming in October 2021 their new Fijian exhibition. Many mystical mishaps have occurred inside the museum including books flying off shelves, photos of ghosts, suspicious late-night footsteps and fingerprints appearing on the inside of Devon’s only mummy case.

For all things Halloween related, come down to the Old Market Square on Saturday 30th October for a Halloween Fayre, 10am-3pm. As well as raising money for Children’s Hospice Southwest, this event will be jampacked with stalls, crafts, fancy dress and fun for all the family.

Whether you’re a believer or not, you can never be sure what’s around the corner in South Devon. Ghost stories and haunted buildings are rife thanks to the rich historic nature of Dartmouth and its beautifully spooky surroundings.

Make sure you’ve liked our Facebook page here to keep up to date with all things Dartmouth!