Enjoy the anticipation of your holiday in Dartmouth by delving into the planning and organising of it all.

Dartmouth town is full of hidden streets and cobbled lanes – so a Map of Dartmouth is certainly a good thing to have. Nearly everything is in walking distance, so you can enjoy exploring Dartmouth at your own leisurely pace.

To aid you in the planning and organising of your holiday we have a Dartmouth Map to help you find your bearings in South Devon. Use this handy Dartmouth map to find your way around and plan your day trip.

If it’s a town map you are after – we have one for you to download here which will help you see all that Dartmouth has to offer. 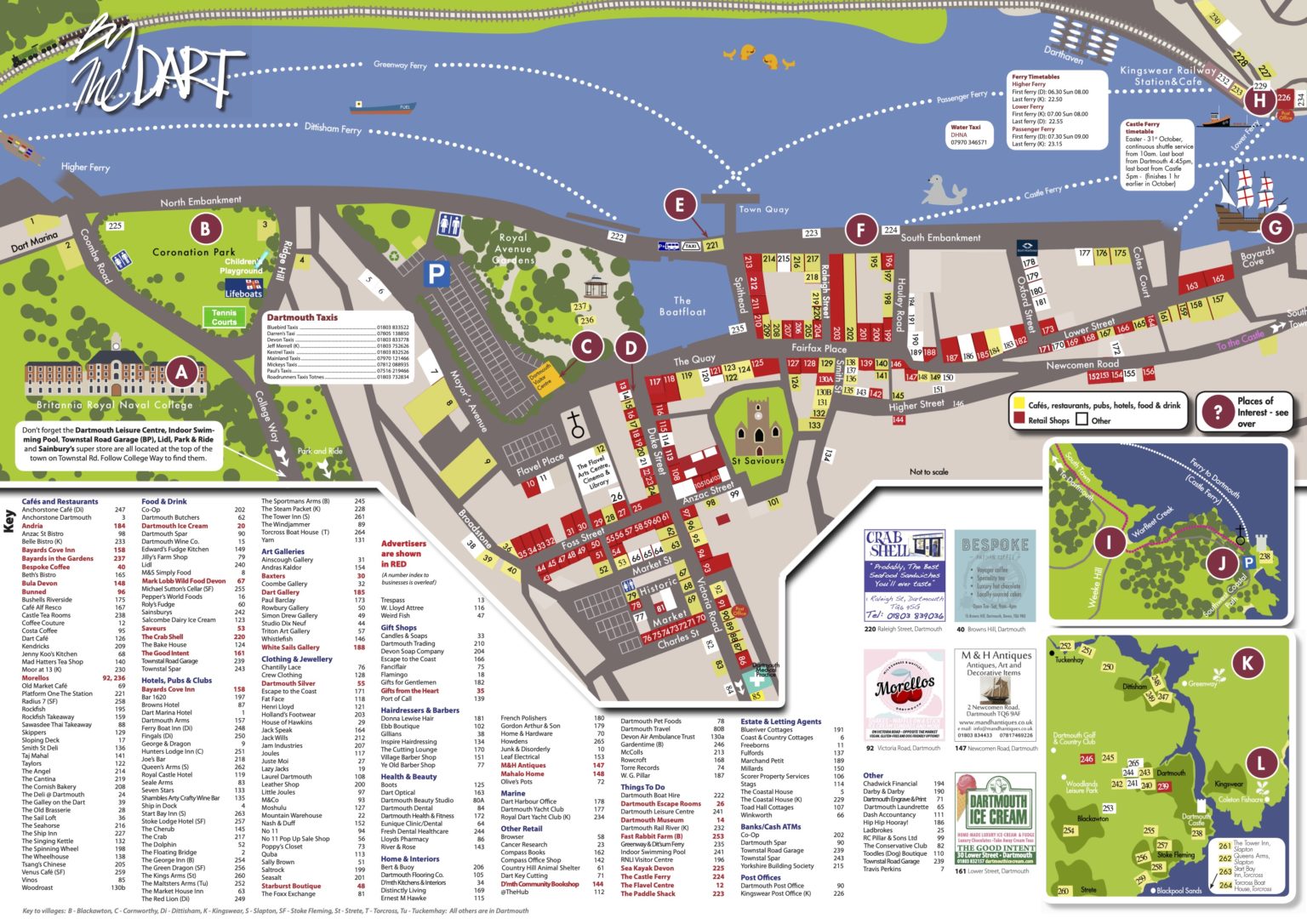 A: Britannia Royal Naval College – Opened in 1905 to replace two old wooden sailing ships which had been moored in the harbour since 1863, the BRNC has been the ‘Cradle of the Navy’ for tens of thousands of officers and still trains hundreds each year. Sir Aston Webb, who also designed Buckingham Palace, Admiralty Arch and the Victoria Memorial, designed the stunning building.

B: Coronation Park – Created in 1935 from the Coombe Mud – helped by donations from the town’s legion of Coal Lumpers who worked keeping the ships, which visited the harbour, fuelled. It was filled in using rubble from

C: Newcomen Engine House – this newly revamped C building is the home of an original version of Thomas Newcomen’s revolutionary steam engine. The Dartmouth- born engineer created the engine to pump water out of mines to help make them safer. His engine was the start of the Industrial Revolution that transformed the world. The Dartmouth engine is one of only two working ones left in the world.

D: The Butterwalk – Built in 1635, the Butterwalk was an D incredibly expensive building, costing £2,500 – or more than a quarter of a million today. The back of the building marks the extent of the land reclamation at the time, which was not extended until the Victorian era. The building was honoured with a visit from Charles II in 1671 when forced into the port to shelter from a storm – the King’s Room where he held court in Dartmouth Museum is named for this visit.

E; Platform One The Station – The original building is the only train station built in the UK which has never received
a visit from a train: the trains terminated at Kingswear and the passenger ferry brought them across to the Dartmouth ‘station’. The Station was sold when the Torbay to KIngswear railway was sold to the Dart Valley Heritage Railway in 1972 and converted into a restaurant. Until 1986 it was built on stilts.

F:South Embankment – This is a marvel of the town F – simply because it took so much effort to get it built! The Embankment was built in 1885. Politicians had to rig elections to save it, others to risk entire careers to get it built and the Harbour Authority to go bankrupt more than once to pay for its construction – but today we simply couldn’t imagine Dartmouth without it.

G: Bayards Cove – This was the first quay used by visiting G ships bringing cloth and wine to Dartmouth in the 12th Century. It gained a place in history as being one of the places the Pilgrim Fathers landed during their difficult and protracted voyage to America in 1620.

H: The Royal Dart – this building, built to take advantage of the new railway terminal in Kingswear in the 1860s, was the base for the Coastal Forces during the Second World War. It received the codename ‘HMS Cicala’. Lord Haw Haw announced during one of his broadcasts that HMS Cicala had been ‘sunk’!

I: Warfleet – The beautiful inlet on the way to the Castle was I the site of the Second Crusade’s massing warships in 1147 – 164 filled it and much of the harbour. Despite this Warfleet is NOT named for the fleet that anchored there – it is thought to come from the Anglo Saxon ‘Weala-Fleot’ or ‘The Creek of the Britons’.

J: Dartmouth Castle – first constructed under the guidance of John Hawley, a man who was to pass into Dartmouth legend, the castle at the mouth of the river has been constantly updated and improved throughout its 700 year

K: Greenway – A stunning estate on the banks of the River Dart opposite the beautiful village of Dittisham, which gained fame in the last 100 years after it became the country retreat of Agatha Christie. It is now beautifully restored and preserved by the National Trust. The estate has been occupied
for the best part of 900 years – and was once owned by Humphrey Gilbert, Walter Raleigh’s half brother and the person who founded Newfoundland – Britain’s first colony in the New World. A distinguished soldier and sailor who died on his way back from Newfoundland when his ship sank in a storm – he is said to have spent his final moments sat in a chair on deck reading a book in an attempt to calm his crew.

L: Coleton Fishacre – A beautiful country home built for Rupert D’Oyly Carte between 1923 and 1926. Rupert was the son of the D’Oyly Carte Opera Company founder Richard, who had died in 1901. Rupert revitalized the company and his father’s hotel business, when he took them on in 1913. The home and its incredible gardens are a testament to that success. It is a beautifully preserved testament to 1930’s Art Deco design and a wonderful place for a day out.