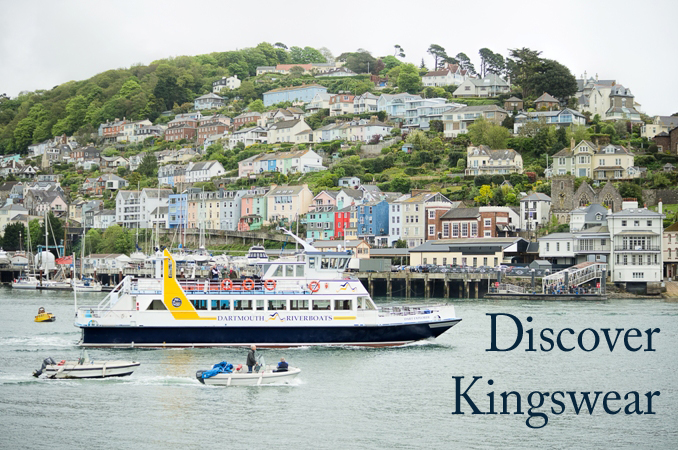 Resting on the east bank of the River Dart opposite our beautiful town of Dartmouth is Kingswear. Many of our guests and residents will be familiar with Kingswear by passing through the village on their way to and from Dartmouth but how much do you really know about the civil parish itself? We’re going to have a look at some of the history surrounding Kingswear and places to visit whilst you’re next nearby.

Although there is no mention of Kingswear in the Domesday Book, it is believed that the close by settlement Kingston dates back to Anglo-Saxon times with evidence of Stone Age settlers. The first documentation of Kingswear actually dates to around 1170. The church was built and dedicated to St Thomas around this time following the murder of Thomas Beckett as a point on the pilgrimage route to his grave in Canterbury. Many pilgrims travelling from Brittany and by sea from further west were known to have used Kingswear as a landing place. The Church of St Thomas of Canterbury is a Grade II listed building and was rebuilt between 1845 to 1847 with all but the original 12th century tower being demolished at that time.

Kingswear and Dartmouth’s positions on the River Dart mean that they have both long been the starting point, stop or end of long journeys for many men and women throughout history. We’re sure by now that you’re familiar with the story of the Mayflower and its connection to Dartmouth, (if not more information can be found out about that here) but did you know that Kingswear also has a connection to another voyage to America shortly after? A ferry was in operation between Kingswear and Dartmouth by 1365 from Kittery Point, the westernmost tip of Kingswear and in 1636 settlers sailed from there to North America and founded the town now known as Kittery in Maine.

A notable feature of the village of Kingswear is also its castle, which stands guard at the mouth of the River Dart. An artillery fort constructed between 1491 and 1502, Kingswear Castle is believed to be one of the first purpose built artillery forts in Britain. The best way to view the structure these days is by boat as it is not open to the public, although it is used as a holiday let so if you’re really intrigued you could even stay there for your break!

We can’t talk about Kingswear without the mention of the steam heritage railway which runs from Paignton to the village. Since 1973 the line has been operating mainly as a tourist attraction and is run by the Dartmouth Steam Railway and River Boat Company. Throughout the year the railway hosts a range of fantastic events for visitor to enjoy and the views of the River Dart and surrounding countryside are simply stunning. This line reached Kingswear in 1864 connecting the South Hams village with cities such as London and Exeter and it became part of the Great Western Railway in 1876. Plans to extend the railway across the River Dart to Dartmouth never came to fruition which is why a station was built in Kingswear, however the original station can still be found in Dartmouth which now houses the Station Café. Crossing the Dart from Kingswear can now be enjoyed on one of three ferries, two vehicular ones; the Higher Ferry and the Lower Ferry, as well as the Passenger Ferry which departs not far from the train station.

Outside of the hub of the village, there are two nearby National Trust properties, Greenway Estate and Coleton Fishacre. Greenway Estate lies upstream from Kingswear and is predominantly known as crime-writer Agatha Christie’s holiday home, whilst Coleton Fishacre is an Arts and Crafts style property with beautiful gardens to explore. Not far from Coleton Fishacre you’ll also find The Daymark. An 80 foot, octagonal stone tower built in 1864 as a navigational aid to Dartmouth Harbour. The Daymark can be found just above Froward Point and is a popular walking area with the WW2 Brownstone Battery nearby to.

Hopefully we’ve given you a little more insight into the historical and interesting village of Kingswear and a few ideas of places to visit whilst you’re there.

Keep up to date with everything Dartmouth by liking our Facebook Page here and following us on Twitter here. We’ll let you know about all our latest competitions, blog posts, what’s on and more!